Is it ever too late?

Is it ever too late? 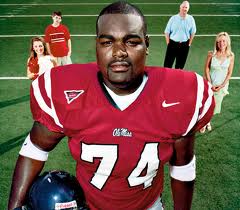 Michael was one of thirteen children by a mother who was a crack cocaine addict. He didn’t know his birthday. He didn’t know his father. He wasn’t even sure if Michael was his real name. Every day’s goal was mere survival. He had attended eleven different schools by the time he was fifteen years old in part due to his bouncing around the foster care system. He had no permanent address. He was a black homeless teenage dropout surviving on the streets of inner-city Memphis.

A white Christian family invited him into their home. The Tuohys ended up legally adopting Michael Oher into their family. They sought to enroll him in a Christian school, but he had only a 0.6 grade point average. School officials didn’t think he could handle the academic rigors of a private Christian academy. His IQ score was only 80. Through homeschooling, tutoring, and some online classes that replaced previous poor grades, he was able to get a provisional enrollment. His grade point average continued to rise to a 2.05 making him eligible to play football on the high school team. By the time he graduated, he was on the honor roll.

Michael had never played organized football before, but he flourished as an offensive and defensive lineman, and was invited to play in the U. S. Army All-American Bowl in 2005 on ESPN. The network named him the #1 offensive high school lineman in the nation.

After graduation, Michael went to Ole Miss where he started as a freshman and was named to several All-Conference and All-America teams. He also made the dean’s list at the university. Michael Oher was a first round pick in the 2009 NFL Draft. Oher’s story has been chronicled in Michael Lewis’ 2006 bestselling book, The Blind Side: Evolution of a Game. In November of 2009 The Blind Side was made into an academy award winning movie.

This is a remarkable story about a Christian family showing the love of Jesus is a powerful way. The Tuohys were a white family living in a racially-charged city where prejudices run strong. They took in this homeless black dropout son of a crack addict because of the compassion of Jesus Christ. At great personal sacrifice and inconvenience, this family reached out to the helpless and hopeless and made a difference. This boy who would possibly have ended up dead on the streets of Memphis or incarcerated has become a successful player in the NFL.

It makes me ask myself, “What am I doing to show the unique and extraordinary love of Jesus Christ to others?”

Michael Oher has written his own book titled “I Beat the Odds: From Homelessness, to The Blind Side, and Beyond” in this book Michael tells his story in his words. Michael states that he had two goals in writing this book, “first is that he wanted to help separate fact from fiction.  Second is to talk about—and to—the nearly 500,000 children in America whose lives have been so rough that the state has determined they’re better off being cared for by someone other than their parents. Michael states “The odds are stacked against those children. Less than half will ever graduate from high school. Of the ones who drop out, almost half of the boys will be imprisoned for violent crimes. Girls in foster care are six times more likely to have children before the age of twenty-one than are girls in stable families. And of those kids, more than half will end up in foster care themselves. The outlook is pretty bleak for kids like me. I beat the odds.”

By Daniel Nehrbass|January 15th, 2015|Adoptions|Comments Off on Is it ever too late?

About the Author: Daniel Nehrbass